With a victory in XC1 Pro, Brycen Neal attained a career first over the weekend. Neal topped the podium at AMSOIL GNCC Round 3, the Maxxis General, held March 17 in Washington, Georgia.

Neal, of Bneal Motorsports/CST Tires/Houser Racing, took the lead about a half-mile into the course. He didn’t drop behind for the rest of the race, even through the ultra-demanding Monster Mile, when he and Chris Borich were neck and neck. Despite a fierce challenge from Borich throughout the last lap, Neal held his lead and took his first-ever XC1 Pro GNCC win in a heart-stopping finish. After three rounds, he holds second place in points for the class.

Adam McGill had a difficult day but demonstrated grit and determination in finishing the race. Despite severe blisters on his hands which made steering next-to-impossible, he managed a top-ten finish, earning eighth place. McGill is currently fifth in XC1 points.

CST congratulates Brycen Neal on achieving this career first XC1 Pro victory, and looks forward to cheering both Neal and McGill on at the next GNCC race, FMF Steele Creek, scheduled for April 7-8 in Morganton, North Carolina.

Yokley’ said that his CST Behemoths aided in his victory. “The tires worked so well. The Behemoth is so predictable and provides a very plush ride. I love them, because they do exactly what I think they are going to do,” he said. After two UTV races, Yokley’s Polaris National Guard machine leads the UTV XC1 Modified class standings with 41 points, with Kiger’s Coastal National Guard machine just four points behind in third place.

McGill, who jockeyed with another rider in the front four throughout the main race, was just as pleased with the performance of his CST tires: “The tires never missed a beat all race; no holes and no worries, with a good pulse.”

CST congratulates William Yokley on his victory and thanks Scott Kiger, Adam McGill and all of its riders for their fine performances. 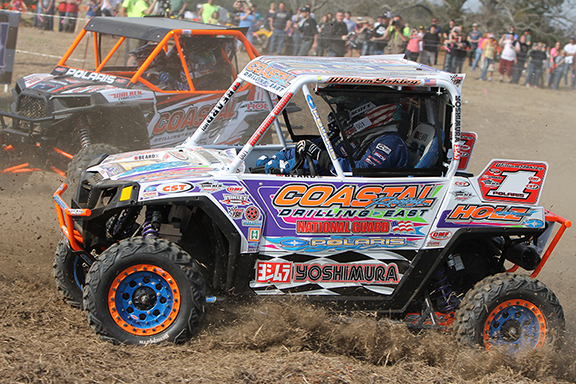